Admiral Collingwood Lodge
Welcome to SafariNow. Get off your accommodation booking by paying with the voucher code before . 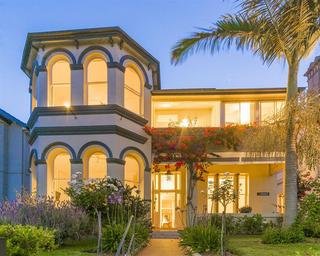 The Admiral Collingwood Lodge is a Heritage listed Mansion in a quiet back street in the harbourside suburb of Drummoyne. It has views of the Sydney Central Business District (CBD) glimpses of Sydney Harbour and easy travelling distance to the CBD by bus or ferry.Admiral Lord Collingwood was one of Britain's greatest wartime commanders. Early in his naval career he even fought on land in the American Revolution in the Naval Brigade at the 1775 Pyrrhic victory of the Battle of Bunker Hill.He was known in the navy as “Nelson's Own Hero”. Collingwood in 1805 tricked Napoleon's fleet into remaining in Cadiz until Nelson could bring his fleet up. It was Cuthbert Collingwood who finally defeated the superior combined French & Spanish fleets at the Battle of Trafalgar. This was as commander of the British after Lord Nelson's death during that battle.This erudite and witty man now lies buried next to his close friend Nelson in St Paul's Cathedral. he security and stability conferred by the “Trafalgar Century” following the battle is widely credited as having major impact on the peaceful and profitable growth to nationhood of the Commonwealth of Australia in 1901.We have sought to offer guests an accommodation experience worthy of Admiral Collingwood. Our eleven large double rooms and eight single rooms are all fully furnished and have hot and cold water. The furniture is new and fresh clean sheets and towels are provided. There is a kitchen and dining room an outside sunny well-tended garden patio and barbeque. Industrial quality coin-operated washing and drying machines are available for guests. Four new bathrooms two on each floor provide comfortable facilities for guests. Free WiFi is available in all rooms. On-street parking is unlimited and free.

Click to display the map
Admiral Collingwood Lodge is 2.4km from the centre of Rozelle , the nearest airport 11km (Sydney Airport).
*Distances are shown as the crow flies and not necessarily the actual travelling
×