Welcome to SafariNow. Get off your accommodation booking by paying with the voucher code before .
South Africa/KwaZulu-Natal/Durban/Umhlanga/Umhlanga Rocks/Umhlanga Lighthouse 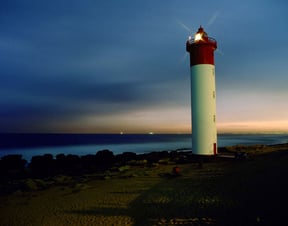 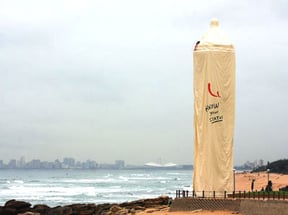 Visit a lighthouse on the Sugar Coast that once caused an un-nautical stir – draped in a condom!

The landlubber nonsense on Umhlanga's beach was all for a noble cause and brought a massive HIV-Aids awareness message on World Aids Day. The red and white 21-metre tall lighthouse was draped in fabric to resemble a giant condom and inscribed with the message 'Know your status'.

So what was the reason behind this controversial transformation? Iain Buchan from the Unlimited Child, an NGO working in the Valley of 1000 Hills, says they wanted to highlight the plight of Aids orphans.

“The feedback I've had so far from some of our people here has just been fantastic. We're getting people sending us SMSes, blogging, just saying it's incredible, the response and the awareness. And that's really what putting this condom on the lighthouse has done. It's kind of shaken people's awareness to say, 'ok this is different, and how can we get involved?'."

Now it’s business as usual for the Umhlanga Lighthouse, beaming out nightly signals visible to vessels as far as 24 nautical miles away. The fixed red light enables ships waiting to anchor in the outer anchorage to monitor their position. You will find this landmark near the end of Lighthouse Road in Umhlanga.

Reviews:
1 Review
Things to do in Umhlanga Rocks

★★★★★ 5 Reviews
Sleeps 4 in 2 rooms
Umhlanga Rocks Self-catering
417 The Breakers is based in Umhlanga Rocks, on Lagoon Drive. This is a two bedroom fourth floor unit, with views of the surrounding area...
R1900
Total for your stay
View Deal

★★★★★ 6 Reviews
Sleeps 6 in 3 rooms
Umhlanga Rocks Self-catering
The self-catering apartment consists of an open plan lounge and dining area, with a kitchen. There are three double bedrooms with a main en...
R1800
Total for your stay for 2 guests
View Deal

Sleeps 72 in 0 rooms
Umhlanga Rocks Hotel
The Royal Sibaya Hotel is perfectly located for both business and leisure guests in Durban. The property has everything you need for a...
R2805
Total for your stay
View Deal

★★★★★ 4 Reviews
Sleeps 20 in 7 rooms
Umhlanga Rocks Bed and Breakfast
Old 'n New Bed & Breakfast is a home away from home in the heart of Umhlanga. The bed and...
View Deal

Click to display the map
Umhlanga Lighthouse is 2.4km from the centre of Umhlanga , the nearest airport 15.3km (King Shaka International Airport).
*Distances are shown as the crow flies and not necessarily the actual travelling

Other things to do near Umhlanga Rocks

★★★★★ 1 Review
Sport Stadium or Club in Stamford Hill
Durban's stadium, the Moses Mabhida Stadium, played host to one of the 2010 Fifa World Cup...

★★★★★ 3 Reviews
Beach in Addington Beach
Due to its protected position near Durban’s harbour, Addington Beach is a perfect beach for...
See all things to do near Umhlanga Rocks
WEB4