Welcome to SafariNow. Get off your accommodation booking by paying with the voucher code before .
South Africa/Eastern Cape/East London/Quigney/Eastern Beach 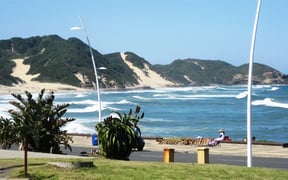 Although East London is considered the most laid-back city in South Africa, it has a thriving beach culture with a beach to suit everyone. Eastern Beach frequently offers awesome waves for surfers, is regarded as a photographer’s nirvana and lures more adventurous beachgoers. Situated centrally and close to the East London Aquarium, its also one of the most popular. Facilities include changing rooms and take-away outlets.

Reviews:
1 Review
Things to do in Quigney

★★★★★ 1 Review
Sleeps 168 in 0 rooms
Quigney Hotel
Boasting a garden and bar, as well as a restaurant, Windsor Cabanas & Courtyard is situated in East...
R1380
Avg per night for 2 guests
View Deal

Sleeps 20 in 0 rooms
Quigney Hotel
Located on the city’s spectacular Eastern Beach promenade and just 5 minutes from the CBD, the Garden Court East London hotel is the ideal...
View Deal

Click to display the map
Eastern Beach is 1.2km from the centre of Quigney , the nearest airport 11.2km (East London Airport).
*Distances are shown as the crow flies and not necessarily the actual travelling

Other things to do near Quigney

★★★★★ 1 Review
Beach in Nahoon
Nahoon Beach is part of the pristine Buffalo City coastline that encompasses secluded beaches and...

Beach in Nahoon
Send your kids to Jonginenge Eco Adventures for an action-packed day while you take a much-needed...
See all things to do near Quigney
WEB3