Welcome to SafariNow. Get off your accommodation booking by paying with the voucher code before .
South Africa/Gauteng/Soweto/Orlando West/Hector Pieterson Memorial Museum 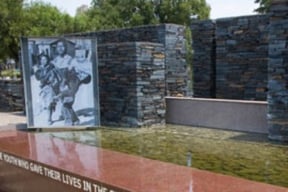 The photo of Hector Pieterson, one of the students killed in a storm of bullets during the 1976 Student Uprising in Soweto, is an image etched into the hearts and minds of many.

This picture made Hector a symbol of youth resistance to Apartheid after a peaceful protest march on 16 June 1976 turned deadly.

The inspirational museum is a small redbrick building that blends in with the humble neighbouring community homes. A sensitive display follows the timeline of the buildup to 16 June, starting with the school-by-school strike among Soweto's scholars.

Today, 16 June is National Youth Day, honouring young people who gave their lives in the struggle for democracy and freedom.

Things to do in Orlando West

★★★★★ 5 Reviews
Sleeps 14 in 7 rooms
Orlando West Bed and Breakfast
Ngwenya Bed and Breakfast is a comfortable guest house situated in Soweto, a city of enterprise and cultural interaction. Soweto is a...
R600
Total for your stay for 2 guests
View Deal

★★★★★ 2 Reviews
Sleeps 18 in 14 rooms
Orlando West Backpacker
Head out to the famous suburb of Orlando West for a unique experience. Get to know Soweto by walking the streets and learn the township...
R220
Total for your stay for 1 guest
View Deal

The Rose Bed and Breakfast

Click to display the map
Hector Pieterson Memorial Museum is 6.9km from the centre of Soweto , the nearest airport 35.6km (Lanseria International Airport).
*Distances are shown as the crow flies and not necessarily the actual travelling

Other things to do near Orlando West

Golf Course in Germiston
Glendower Golf Club prides itself as a "classic" course, exuding quality and timeless appeal. The...

Racecourse in Germiston
For the most comprehensive history of South African horseracing in South Africa, the Thoroughbred...