Welcome to SafariNow. Get off your accommodation booking by paying with the voucher code before .
South Africa/Limpopo Province/Modjadjiskloof/Giant Baobab 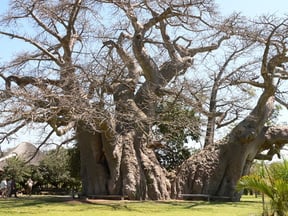 Drink a pint inside the widest tree in the world! The legendary Sunland Baobab in Modjadjiskloof is internationally celebrated for being the widest of its species in the world. These magnificent trees evoke impressions of quintessential Africa, and if they could speak - many a fascinating tale could be told.

Old baobabs eventually become hollow inside, and the Sunland Baobab has wonderful caverns within its incredibly wide girth. In 1993, the owners of Sunland Farm cleaned out the hollows and found artefacts of Bushmen and first white settlers.

The spacious caverns were then turned into a pub and wine cellar - the famous Baobab Tree Bar and Wine Cellar! The ‘Baobar’ can accommodate up to 60 people. This unusual landmark has since become a popular tourist destination in the Limpopo Province. In spring, the Sunland Baobab produces beautiful, large flowers and attracts a variety of birds - including two pairs of owls.

Click to display the map
Giant Baobab is 11.4km from the centre of Modjadjiskloof , the nearest airport 86km (Polokwane Airport).
*Distances are shown as the crow flies and not necessarily the actual travelling

Other things to do near Modjadjiskloof

★★★★★ 2 Reviews
Nature Reserve in Hans Merensky Nature Reserve
Lying on the banks of the Great Letaba River just west of Kruger National Park and close to...